Do you love the sea and nature? Don’t move too far, in Sicily there are realities like Ustica that can really leave you breathless. Sicily is’ a very beautiful territory indeed, both from a cultural and historical-artistic point of view and instead from a more properly naturalistic one. The discovery of Sicily will amaze you because it will give you the opportunity to find what you are looking for in various forms. If in fact, you want a slightly quieter vacation or and instead you want to be a tourist and acculturate, Sicily can give you some excellent solutions.

One of the most beautiful and unspoiled islands in Sicily is Ustica. A municipality of about 1,300 people that apart in the province of palermo. This area is really very unique and is about 67 km away from Palermo. It doesn’t belong to the Aeolian Islands as much as it is an islet that was formed from volcanic origin thousands of years ago. It is really very small with 12 km circumference and from numerous caves. One of the characteristics of Ustica lies precisely in its marine beauty with high and steep coastlines, but above all the many rocks and a geographically and characteristic territory. It is really very small with 12 km circumference and from numerous caves. We have a lot of history and culture in Ustica, being classified in the past as the home of the sorceress Circe who is told of the Odyssey.They find numerous archaeological finds throughout the area. Because of its location, it was traversed by virtually every type of population in the Mediterranean until it became home to the Bourbons. On the history of Ustica,

In the territory of Ustica are found above all, numerous archaeological sites. First among them is the village of Tramontana. It is a prehistoric village dating back to the Bronze Age located in the locality of Tramontana. You can also explore its Necropolis, which dates back to the 13th century B.C. Another relevant archaeological area is the Village of Rocca Falconiera. This village also shows the remains of an advanced fortress the Rivellino di San Giuseppe is a fortress of the period that was destroyed by Barbary pirates. Questo sito risale al terzo secolo avanti Cristo. However, in Ustica there are also numerous military architectures such as the tower of Santa Maria, the Tower of the Spreader or religious ones such as the Ferdinand King church located in the town center on the square of Ustica. Absolutely worth seeing also,is the spreader aquarium located in the marine reserve where there are numerous aquatic species.

The ‘island is also characterized by Sicilian cultural and food and wine traditions. The island offers a wide selection of restaurants, places to taste excellent wine, and typical local stores displaying goods and souvenirs related to the area. What are you waiting for! Book your vacation! 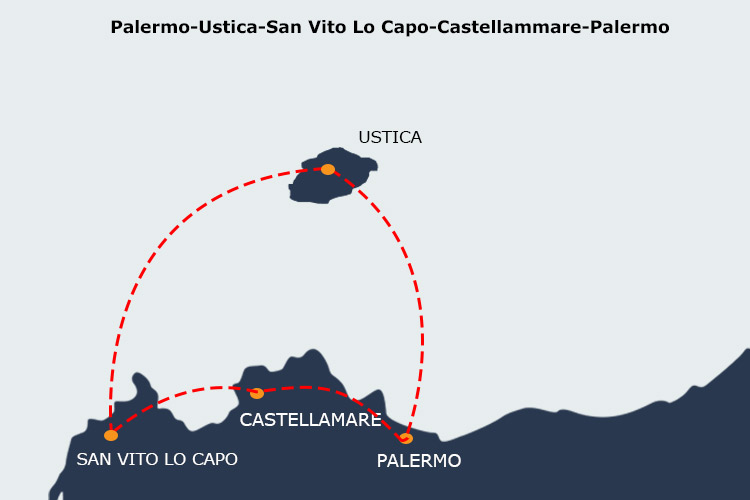